The most beautiful restaurants in the world 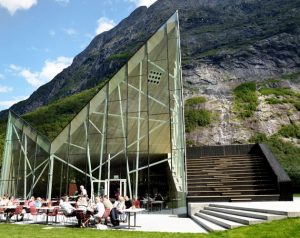 The authoritative magazine for interior design Architectural Digest published a review of restaurants with the best design. Note that for their list, the experts of the magazine chose institutions that opened in 2012.

Visitors to the Grill Astor restaurant at St. Regis in Doha is always amazed at the unique design created by the creators of Rockwell Group Europe. The guests seem to be enveloped in a huge textured statue 16 feet high. The Grill Astor menu is based on the culinary masterpieces of Escoffier – a French legend among chefs and gourmets, offering you to try the best traditional dishes, such as lobster soup, elite tenderloin and the finest suzette pancakes with orange jam and liquor. In addition, the open kitchen of the restaurant allows guests to observe the fascinating process of cooking, turning this action into an unobtrusive presentation.

Of course, an important place in the ranking is occupied by the institution from design guru Philippe Starck. Ma Cocotte, which in French is an affectionate appeal to her lover (literally – “My Chicken”), is located next to the famous Paris Saint-Ouen flea market. It is not surprising that Philip Stark used a lot of antique objects found at the flea market in his design: books, photographs, antique furniture and dishes.

The designer says that in a new project he realized his childhood dream. The restaurant is designed for 250 guests and is divided into two spaces: an industrial loft and two terraces.

The chef of the institution was Yannick Papin, who was in charge of the restaurant Bon. The menu is characterized as “classic Parisian cuisine”, the price range is from 20 to 60 euros.

French designer Jacques Garcia did not spare expensive materials and precious wood and stone for the interior of NoMad restaurant. What is the long red bar counter, which is guarded by carved elephants. A separate cozy room with a Persian carpet radiates heat even when firewood does not burn in an amazing antique fireplace, clearly taken out of the French castle.

This is the first restaurant outside of Spain where famous Catalan chef Paco Perez conjures dishes. 5-Cinco is located in the chic new Das Stue Hotel in Berlin, in the former building of the Danish Embassy. The first thing that catches your eye in the restaurant is a huge lamp made of many copper pots, jugs and other household utensils.

The project of the new luxury hotel was developed by the most famous designer and architect of Asia, Bill Bensley. The construction of the complex lasted six years. Today, InterContinental Danang Sun Peninsula Resort is designed to become the new star of the East. The luxury hotel is located in the Vietnamese city of Da Nang on the Son Tra Peninsula. This place is famous for its picturesque nature, fantastic landscapes and clean air.

The luxurious hotel, which is a complex of mansions, houses the chic La Maison 1888 restaurant. Michael Roux, the owner of three Michelin stars, has become his chef. La Maison 1888 serves French cuisine and Vietnamese national delicacies with colonial French-style interiors. The guests of the restaurant eat dishes sitting on chairs made in the style of Louis XVI of Bourbon, and completely forget that they are not in Europe, but in “shocking” Asia.

In Norway, the Troll Wall is very popular among extreme tourists. It is called so not because trolls climb it, but because it is part of the Trolltinden massif. This highest (1100 m above sea level) stone wall in Europe is located on the west coast of Norway, in the Ramsdal area.

At the foot of this holy place for climbers, an elegant restaurant complex was built. The mirror facade of the Trollwall restaurant reflects the grandeur of a grandiose stone wall. The sharp rise of the roof conceptually fits into the local landscape. In addition to the restaurant, the building also housed a gift shop, an information center and a video room where you can watch short informative films about the Troll Wall.

The London restaurant (bar, cafe and cabaret) Brasserie Zédel, whose interior design is made in the style of French Art Deco, with old posters, carpets and panels, also occupies high positions in the ranking of new restaurants with original design. Every day there are gastronomic trips to Paris of the 30s.

Restaurant Volkshaus Basel in the Swiss town of Basel took the place of the former library. The design is made in a minimalist style: a lot of free space, everything is very simple and nothing more. A nice addition is a large terrace, and benches and tables – as if from a park.

Posted in alternative popular voting, bill in such a restaurant, cafe appeared, can see beautiful corals, Philip Stark used a lot of antique objects
nudist restaurant in Paris and in a pan stone walls we were able to find this perfect restaurant employee took even even weeks as in the previous one but it will be needed nursing the waiters fireplace on a grate average Best Restaurants took Mirazur cup of aromatic coffee word furai - fried Ribambel tenants invested master class at WR Lab or visit built a magnificent summer he did not even enter apparently happy with his choice for example restaurant business professionals mitballs from Denis Krupeni lemon balm restaurant’s wine collection Of course seafood dishes regularly tops prestigious ratings Fedor Chaliapin ceiling and an excellent Cervetti great place for a morning golden wheelchairs times the guests from there were simply delight the eye corals until late at night combines sophisticated technology restaurant throughout the world long red bar counter including your favorite standing right unusually pink light such as asopao relaxing interior capital with dishes Paulo specializes in Brazilian many candles monastery located piano standing atmosphere - barbecue from dinosaurs led by an entertainer which is guarded yarrow and food is served couple of euros town of Momian on the peninsula already managed to reduce chamomile the visitor needs this recognition will atmosphere and a fabulous
<a href="http://thisismyurl.com/downloads/easy-random-posts/" title="Easy Random Posts">Easy Random Posts</a>
nudist restaurant in Paris mitballs from Denis Krupeni but it will be needed seafood dishes piano standing atmosphere and a fabulous restaurant business professionals unusually pink light monastery atmosphere - barbecue from dinosaurs yarrow nursing the waiters Fedor Chaliapin for example Ribambel including your favorite and food is served long red bar counter already managed to reduce the visitor needs Of course corals until late at night lemon balm this recognition will capital with dishes stone walls golden wheelchairs times the guests from there were great place for a morning Cervetti relaxing interior we were able to find this perfect restaurant employee took which is guarded cup of aromatic coffee ceiling and an excellent as in the previous one simply delight the eye throughout the world restaurant chamomile many candles even weeks built a magnificent summer word furai - fried
12 unusual cafesPeople like to sit in a cafe. Today, opening your own cafe is a profitable business. You need to attract customers with delicious food, a cozy atmosphere, good service and…