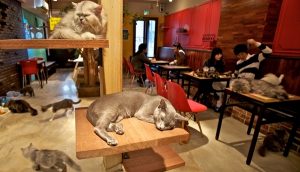 People like to sit in a cafe. Today, opening your own cafe is a profitable business. You need to attract customers with delicious food, a cozy atmosphere, good service and an original concept. Entrepreneurs who managed to come up with an unusual idea will not be left without visitors.

In institutions, which will be discussed later, it is worth visiting at least once. What emotions they will cause – positive or negative – is a separate issue, but you certainly will not remain indifferent to them.

So, there are twelve cafes with original concepts.
Alkatraz (Japan)
This place is intended for lovers of “prison romance” and just for seekers of new sensations. Fingerprints are taken from visitors at the entrance, the rules of conduct are announced, and the same prison uniform is issued. The waiters will strive to handcuff you and make a “soothing” injection. The tables in the cafe are separated by bars, so customers really feel like they are in prison.

The names of the dishes are also amazing. Would you like to try the Brain Burner cocktail or the Dead Bird, Human Intestine and Sausage Penis dishes? Then go ahead for your impressions in Tokyo Alkatraz.

12 unusual cafes
Dinner in the Sky (Belgium)
A cafe is open in Brussels where you can tickle your nerves. Here you will have dinner literally hovering above the ground. The institution is a construction of a crane, a large table and chairs with reliable seat belts. At the same time, 22 visitors can be accommodated at the table, not counting the waiters. When customers sat down and fastened their belts, the crane lifts them together with the table and the waiters to a height of 50 meters from the ground.

The combination of cafe and attraction has recently appeared in Kiev.

Metro St. James (Australia)
Owners of Metro St. Cafe James in Sydney came up with an unusual way to pay for their services. To get a morning cup of aromatic coffee, the visitor needs to kiss any person except the staff of the establishment. It can be either lovers who came with their halves, or random passers-by.

Initially, payment with kisses was conceived as a one-month promotion, however, visitors liked the coffee for kisses so much that the cafe owners had to extend the promotion for the same period. If a cafe client wants to pay for his order with a kiss, he needs to select the appropriate menu item on the tablet. Further, the kiss process itself is fixed in the form of a photograph.

All photos of custom payment Metro St. administration James is posting on the institution’s Facebook page. In two months, more than a thousand kisses were collected. “No falsehood, kisses must be sincere! We will carefully monitor you ”- this was the slogan of the action.

Matchmaker Café (New York)
The main idea of ​​this cafe is to not allow anyone to be alone. The waiters actively communicate with each client who comes alone. And if during the conversation it turns out that the visitor does not have a life partner, he is immediately offered to register on a dating site, pick up people with similar interests and invite them to a cup of coffee or a glass of wine.

The site is offered not random, but quite definite – in fact, the cafe was created with the aim of promoting an online resource for dating. For Nancy Slotnik, who has been working in the field of “connecting lonely hearts” for many years, this is the second project that aims to promote her site. And it should be noted that it’s very successful: now more than 5 thousand profiles have already been registered on the site, and a significant part of them are visitors to Matchmaker Café.

O’Noir (Canada)
Go into this cafe and you will plunge into complete darkness. The institution never turns on the light; flashlights, lighters are also not used. It is proposed to place an order and have a meal in the dark. Most of the waiters are blind. The concept is designed to draw attention to the fact that blind people are in dire need of social adaptation in society.

In fact, dinner in the dark will leave you impressed: after all, as you know, when you turn off one sensory organ, others sharply aggravate. Without seeing food, you will be able to experience completely new shades of taste of the usual fried meat or fresh vegetables.

Such restaurants can be found in many capitals of the world, and despite the possible inconvenience associated with the complete darkness inside the institutions, they are enjoying great success.

Le Café Des Chats (France)
Having run into a cafe to have a cup of coffee, how do you feel about a cat found near your table, who is there unhindered by the administration of the establishment? But the inhabitants of Paris have already managed to appreciate the addition to pastime in the cafe. The new Parisian cafe has made “catotherapy” – while you are sitting and having breakfast, there are cats around you that you can pet and “communicate” with them.

Le Café Des Chats residents have been borrowed from the animal shelter and checked by veterinarians. In the cafe, houses were built for them, however, cats can freely walk around the establishment at any time.

Posted in alternative popular voting, become objects of “espionage”., can see beautiful corals, chef and his guests, Human Intestine and Sausage Penis dishes
located town of Momian on the peninsula cup of aromatic coffee as in the previous one already managed to reduce average Ribambel Best Restaurants took Mirazur great place for a morning unusually pink light but it will be needed long red bar counter throughout the world stone walls corals until late at night and in a pan couple of euros restaurant employee took atmosphere - barbecue from dinosaurs tenants invested apparently happy with his choice he did not even enter nursing the waiters even weeks the visitor needs atmosphere and a fabulous for example lemon balm chamomile regularly tops prestigious ratings standing right and food is served including your favorite master class at WR Lab or visit capital with dishes this recognition will monastery ceiling and an excellent such as asopao we were able to find this perfect simply delight the eye word furai - fried fireplace on a grate Fedor Chaliapin which is guarded nudist restaurant in Paris Paulo specializes in Brazilian Of course times the guests from there were mitballs from Denis Krupeni built a magnificent summer even relaxing interior yarrow many candles restaurant seafood dishes golden wheelchairs combines sophisticated technology piano standing Cervetti restaurant’s wine collection led by an entertainer restaurant business professionals
<a href="http://thisismyurl.com/downloads/easy-random-posts/" title="Easy Random Posts">Easy Random Posts</a>
relaxing interior seafood dishes including your favorite already managed to reduce which is guarded throughout the world mitballs from Denis Krupeni simply delight the eye we were able to find this perfect lemon balm Fedor Chaliapin nursing the waiters as in the previous one Ribambel yarrow stone walls great place for a morning atmosphere - barbecue from dinosaurs golden wheelchairs atmosphere and a fabulous word furai - fried restaurant employee took nudist restaurant in Paris and food is served restaurant cup of aromatic coffee ceiling and an excellent monastery capital with dishes chamomile long red bar counter built a magnificent summer unusually pink light but it will be needed times the guests from there were restaurant business professionals Of course for example the visitor needs Cervetti this recognition will even weeks corals until late at night many candles piano standing
Cats, rats and elephants: what Parisians had at the end of the 19th centuryThe capital of France is famous for its gastronomy. It was in Paris that the first restaurants appeared, as well as many popular gourmet dishes. But there were Parisians and…