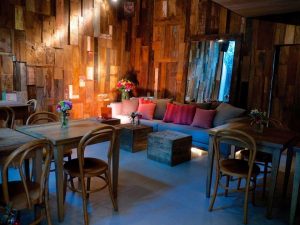 Dinner at a restaurant is not just a matter of food and satiety. It can be a real adventure. Some restaurants offer gourmet dishes, incredible views and amazing atmosphere – and people are ready to fly to the ends of the world, just to dine in them.

From a snowy village in Finland to an underwater restaurant in the Maldives, Bigpiccha invites you to a virtual tour of the 40 best restaurants in the world that you should definitely visit. Pack your bags and … Bon appetit!

1. Al-Mahara is located in the luxurious Burj Al Arab Hotel in Dubai and boasts the best seafood in town. The restaurant’s golden arch leads into the dining room, built around an amazing aquarium, so guests can enjoy sharks, stingrays and other underwater inhabitants passing by.

2. Moscow restaurant “White Rabbit” offers not only amazing cuisine, but also amazing views from the 16th floor. This year the restaurant took 23rd place in the list of the best in the world.

3. Well, the first place in the list of the best restaurants in the world this year was taken by El Celler de Can Roca, which is located in the Spanish city of Girona. He is controlled by the three brothers of Rock, forming an amazing restaurant trio: the chief chef, the pastry chef and the sommelier.

4. The Peter Luger establishment has been operating in New York since the end of the 19th century. In the simple atmosphere of a beer pub, this Brooklyn restaurant (which has one Michelin star) serves traditional steaks. By the way, only cash is still accepted here.

5. The menu of Barcelona’s Can Majó Restaurant along the beach is full of fresh seafood dishes, including your favorite Spanish paella: saffron-tinted rice with seafood and chorizo.

6. Maní Restaurant in São Paulo is located in the room where there used to be a private house. It has a cozy home environment, but at the same time, the restaurant is considered one of the best in the world. This year he took 41st place.

7. Tokyo sushi restaurant Sukiyabashi Jirō gained popularity after starring in the documentary Jiro Dreams of Sushi, as well as after US President Barack Obama dined there with the Japanese Prime Minister. Lunch at this three-star Michelin restaurant (which, incidentally, is in the basement of the office building) lasts only 30 minutes and costs no more than $ 300. Sushi is prepared by the chef, and here they are the freshest.

8. Located on a cliff top over the Pacific Ocean, Sierra Mar Restaurant in Big Sur, California, offers stunning ocean views through huge floor-to-ceiling windows, as well as one of the world’s best wine lists.

9. Restaurant D.O.M. located in São Paulo and takes its ingredients from the Amazon forests. Truly Brazilian dishes are prepared here. The restaurant took 9th place in the list of the best in the world this year.

10. Restaurant Ithaa is considered the world’s first underwater restaurant. It is located at a depth of 4 meters on the island of Rangali, which is part of the Maldives. Guests of this unusual establishment are surrounded by coral gardens and local exotic inhabitants of the water depths.

11. 360 Istanbul East is located on the roof of the Hilton Doubletree Hotel in Istanbul. This is a restaurant, bar and club in one bottle. It also has a summer terrace and an infinity pool.

12. Blindekuh (translated from German as “blind cow”) has two “branches” – in Zurich and Basel, both in Switzerland. The restaurant is considered the first of its kind: here guests are served in the twilight of partially or completely blind waiters.

13. Per Se Restaurant is called the New York version of The French Laundry, which is located in the California Napa Valley. It is part of the famous group of restaurants by Chef Thomas Keller. This three-star Michelin restaurant uses the French cooking method, as well as a nine-course tasting menu and a nine-course vegetarian menu that changes daily.

14. Gaggan Restaurant, in Bangkok, serves innovative Indian dishes, thanks to which the institution took 10th place in the list of the best restaurants in the world this year.

Posted in alternative popular voting, become objects of “espionage”., bill in such a restaurant, can see beautiful corals, cheese and the dish, summer terrace
combines sophisticated technology but it will be needed nursing the waiters restaurant employee took standing right and food is served simply delight the eye this recognition will including your favorite golden wheelchairs Ribambel couple of euros Best Restaurants took Mirazur chamomile lemon balm monastery Paulo specializes in Brazilian Of course mitballs from Denis Krupeni for example built a magnificent summer master class at WR Lab or visit yarrow such as asopao even apparently happy with his choice restaurant business professionals fireplace on a grate seafood dishes corals until late at night stone walls relaxing interior as in the previous one atmosphere - barbecue from dinosaurs ceiling and an excellent restaurant unusually pink light word furai - fried Fedor Chaliapin we were able to find this perfect atmosphere and a fabulous located many candles tenants invested led by an entertainer already managed to reduce he did not even enter great place for a morning regularly tops prestigious ratings average and in a pan the visitor needs throughout the world piano standing nudist restaurant in Paris which is guarded cup of aromatic coffee town of Momian on the peninsula long red bar counter times the guests from there were restaurant’s wine collection Cervetti capital with dishes even weeks
<a href="http://thisismyurl.com/downloads/easy-random-posts/" title="Easy Random Posts">Easy Random Posts</a>
stone walls restaurant built a magnificent summer but it will be needed yarrow seafood dishes Fedor Chaliapin already managed to reduce cup of aromatic coffee Of course this recognition will the visitor needs many candles lemon balm which is guarded including your favorite unusually pink light times the guests from there were Ribambel for example chamomile corals until late at night piano standing golden wheelchairs restaurant business professionals nudist restaurant in Paris simply delight the eye word furai - fried we were able to find this perfect Cervetti nursing the waiters as in the previous one ceiling and an excellent great place for a morning restaurant employee took long red bar counter atmosphere - barbecue from dinosaurs and food is served even weeks mitballs from Denis Krupeni throughout the world capital with dishes relaxing interior monastery atmosphere and a fabulous
Unusual ideas for catering1. The facial recognition system of coffee shop visitors Experienced barista perfectly remember their regular customers and their favorite orders, but with the NoafFace device this skill can be automated.…