The most unusual restaurants in the world 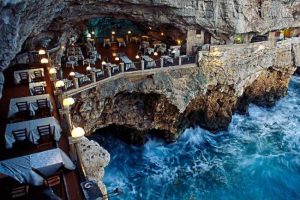 There are unusual restaurants in the world that are famous not only and not so much for their exquisite menu. How do you like, for example, a restaurant where visitors are sitting on the ocean floor? And the restaurant, all of whose staff are children?

There are restaurants where visitors are invited to taste the “Intestine” or they are served by monkeys.

We want to tell you about the most unusual restaurants in the world!

A cafe where visitors can play with cats will not surprise anyone. But what about the restaurant where the monkey waiters work?

Such an institution flourishes in Japan, in the town of Utsunomiya, an hour’s drive from Tokyo.

Two furry employees of the restaurant – small monkeys Fuku-chan (2 years) and Yang-chan (4 years) – work in shifts only 2 hours a day according to the legislation on animal labor in Japan.

The animals bring hot towels to the guests of the restaurant, correctly accept orders and simply delight the eye, nursing the waiters in the same uniform around the room.

In one of the restaurants in the Chinese city of Harbin, robots are used as waiters

Twenty robots with a height of 1.3 to 1.6 meters are busy with the delivery and preparation of dishes. Robots can display on their “faces” more than 10 expressions and pronounce cues.

A two-hour recharge lasts for five hours of continuous operation.

Located in the city of Nuremberg. It completely lacks the waiters. People were replaced by an automated system for ordering food and delivering it.

In order for the visitor to choose food to taste, a touch screen is located on the table with the help of which visitors familiarize themselves with the menu and make orders.

To each table in the restaurant there are paved rails along which hot dishes are delivered to customers, and there are holders for bottles.

The cooking principle is similar to the conveyor algorithm, which is why the restaurant has fast service and no queues. The problem of cleanliness is still solved with the help of maintenance staff.

The most unusual restaurant in Amsterdam. Its highlight is that visitors are served by young Dutch people under the age of 12 years.
They even cook their own meals, however, under the supervision of an adult cook. The institution is famous for its delicious food, desserts are very popular, the main part of the menu is devoted to traditional Dutch cuisine.

In 1999, the dark restaurant O’Noir Montreal opened in Zurich.
There is practically no light in it, and the waiters escort visitors to the tables in night-vision devices.

The institution prohibited lighters, mobile phones. The idea of ​​the restaurant became so popular that such establishments began to open around the world – in France, Germany, the USA, England, Australia, Russia.

Only eating here is uncomfortable in comfort – the food is not corny, but you can focus on taste sensations.

6. Restaurant soaring in the air “Dinner in the Sky” (Belgium)

The Brussels Dinner in the Sky offers lunch at an altitude of 50 meters above ground.

At an unusual table can accommodate 22 people, there are also three cooks, waiters and entertainers.

The whole company, along with the table itself, as well as a canopy, lamps and chairs with seat belts, is delivered to the destination by a crane.

In Taiwan, they decided to bring the toilet theme to the interior of the restaurant. In Modern Toilet Taipei, chairs and all utensils are made in the form of toilets.

Napkins and towels are replaced with toilet paper. Toilet accessories — branded urinals and other delights — are hung on the walls.

And the soundtrack corresponding to the interior – constantly sounds are heard coming down from the tank of water. The owners of the establishment focus on the fact that they are given the opportunity not only to eat, but also to get a boost of good mood. Although the food is no different, the restaurant is fun.
8. Restaurant – “prison” Alkatraz (Japan)

There is a whole restaurant chain in Tokyo called Alkatraz. All institutions are united by the prison theme.

Before getting inside, visitors read out the rules for visiting the restaurant and take fingerprints. Then the guests are offered to taste the thieves’ cocktail and change into a prison robe, in which to proceed to jail.

One of the restaurants is a prison hospital, where visitors are brought to a table inside a prison cell in a wheelchair.

Posted in become objects of “espionage”., bill in such a restaurant, can see beautiful corals, character from the Lewis, chef and his guests, still solved with the help
built a magnificent summer and food is served tenants invested chamomile long red bar counter yarrow which is guarded times the guests from there were as in the previous one atmosphere and a fabulous already managed to reduce unusually pink light Best Restaurants took Mirazur many candles corals until late at night relaxing interior town of Momian on the peninsula nursing the waiters average this recognition will restaurant business professionals including your favorite golden wheelchairs simply delight the eye Fedor Chaliapin restaurant employee took piano standing combines sophisticated technology word furai - fried Cervetti standing right he did not even enter couple of euros Ribambel atmosphere - barbecue from dinosaurs nudist restaurant in Paris great place for a morning located Paulo specializes in Brazilian restaurant’s wine collection such as asopao master class at WR Lab or visit stone walls but it will be needed fireplace on a grate for example capital with dishes throughout the world apparently happy with his choice we were able to find this perfect restaurant mitballs from Denis Krupeni monastery lemon balm and in a pan led by an entertainer Of course ceiling and an excellent even even weeks the visitor needs seafood dishes cup of aromatic coffee regularly tops prestigious ratings
<a href="http://thisismyurl.com/downloads/easy-random-posts/" title="Easy Random Posts">Easy Random Posts</a>
piano standing the visitor needs and food is served simply delight the eye relaxing interior nudist restaurant in Paris cup of aromatic coffee already managed to reduce great place for a morning nursing the waiters golden wheelchairs long red bar counter lemon balm which is guarded Cervetti even weeks unusually pink light ceiling and an excellent throughout the world restaurant business professionals mitballs from Denis Krupeni yarrow monastery seafood dishes for example including your favorite word furai - fried atmosphere - barbecue from dinosaurs Of course many candles chamomile Ribambel as in the previous one atmosphere and a fabulous this recognition will built a magnificent summer stone walls we were able to find this perfect restaurant corals until late at night capital with dishes restaurant employee took but it will be needed times the guests from there were Fedor Chaliapin
16 inspirational examples of underwater restaurantsIn recent years, underwater restaurants, in which visitors are invited to combine a meal with admiring the marine life, began to actively appear around the world, and in the Maldives…